On the Camino de Santiago is where it all began…

Lace-up your hiking boots, limber up your legs, and set out on an unforgettable pilgrimage to the Spanish holy city of Santiago de Compostela. Join Judy and Juan Carlos, alongside their team of dynamic guides, on the walk of your life as Spanish Steps traces the centuries-old footsteps of pilgrims who have ventured across the expansive landscape of the Iberian Peninsula, Italy, and France, for the past 1,200 years. Ever since taking her first “steps” along the well-trodden path to Santiago de Compostela, Judy was hooked. Joining forces with her husband, Juan Carlos Fuentes, they’ve been leading tours since 1996.

JUDY COLANERI, the owner of Spanish Steps and Roman Roads, is a culinary trained chef from the mountain town of Aspen, Colorado where she prepares feasts and healthy meals for the  Hollywood jet-set crowd during her ‘down’ season. For the rest of

the year, you’ll find her guiding pilgrims and hikers to some of her favorite places in Europe. Judy’s contagious passion for exploration and the great outdoors joined with her continuing love for language and the culinary arts, and generous warmth of her personality will make your trip to Asturias a walking-gourmet odyssey! Having walked the Camino de Santiago five times, Judy fell completely in love with Spain (and Juan Carlos!!) and hiking as a form of travel. She has since dedicated her life to guiding people on the Camino de Santiago and along the quieter back roads of rural Europe. Judy is no stranger to the operations of hotels. Having slept in thousands of hotel rooms during her career as a guide, she knows what a traveler wants at the end of a long day. Together with her husband, Juan Carlos, they decided to settle into this remote yet spectacular Asturian village of Faedo and restore a 200+ year old stone farmhouse whose only occupant at the time was the town burra – Michaela and thus, their mountain dream came to fruition; Hotel Fuentes de Lucia. Bi-lingual in English and Spanish, Judy also speaks Italian and French and likes to escape to both countries to practice her skills, often taking her pilgrims with her! She has visited more than 30 countries around the globe and taken care of nearly 500 groups to date, so it goes without saying that Judy’s knack for hospitality is second nature.

JUAN CARLOS FUENTES met Judy on the Camino in 1994 while on his second pilgrimage to Santiago. He has since walked the Camino

de Santiago eight times, including several holy year pilgrimages, and has been sharing his expertise and knowledge about his home country with pilgrims from all over the world since the beginning of Spanish Steps. These days he is more likely to be found ‘at home’ whipping up a storm in the kitchen of Hotel Fuentes de Lucía. Juan Carlos is a native of Spain. Born in Barcelona but raised in a small village in the heart of the Castillian wine country, he now claims Asturias as home. He, along with a small crew of craftsman, toiled and transformed this 200+ year old abandoned farmhouse into a welcoming mountain lodge, which is no mean feat. Each year, he finds an excuse for a new building project so we think he actually likes it!! Engage him in a conversation on any subject of his beloved home country and you will find a wealth of information at his fingertips. His garden is abundant with organic vegetables and fruit trees which he has loved and nurtured and will then serve on your plate. When he’s not tending the vegetable patch, you’ll find him in the kitchen experimenting with local ingredients, creating classic Spanish cuisine, with his own twists, for you to savor alongside a good glass of wine. Together this dynamic duo and co-owners of Hotel Fuentes de Lucia, Judy and Juan Carlos, can turn their hand to just about anything culinary and know exactly what it takes to create a wonderful hospitality experience.

VIRGINIO CORSI accidentally came across the Camino de Santiago in 1997, while studying in Spain. He gathered a small group of friends and together they embarked on the journey of a lifetime to Santiago de Compostela.  After finishing his degree in foreign languages, The Camino pulled him back and he set out again, this time to write a guidebook about the Camino, compiled and published with the efforts of a very motivated team of intrepid travelers and writers. He then settled into an albergue (pilgrims hostel) as a hospitalero for the next two years, where he met his future wife. Later, working on his Phd in History and The Culture of Travel, Virginio turned his focus toward pilgrimage, collecting an in-depth bibliography and vast knowledge about the Way to Compostela. Needless to say, Virginio is a wealth of information on ‘all things Camino’ and beyond! He is currently living in both Spain and Italy, his native country. When not guiding, he teaches language and the culture of travel at Università della Tuscia in Viterbo, Italy and more importantly, is now a family man with two beautiful little girls.

MARIO SUÁREZ FERNÁNDEZ is Asturias born and bred. He holds a Diploma in Education, specializing in Physical Education and also has training as an Emergency Health Technician. Mario began rock climbing almost before he could walk and stil

l dedicates as much time as he can to the sport but also encompasses hiking, mountaineering, and ski touring into his lifestyle. In 2007, he obtained his Mountain Guide Certification (in order to justify his obsessions!!)  Working with Spanish Steps since 2010 he has guided on the Camino del Norte, the Primitivo and Camino Frances, in addition to leading the hikes we offer at Fuentes de Lucía. These days Mario is often found making his own Asturian cider or tending his land. With his wife, he is developing an Experiential Tourism and Educational Project called “Huerta-school”. They have renovated an old farmhouse to become a stunning home and classroom and planted a multitude of fruits and vegetables with an aim to educate the youth of today on how to grow organic produce and live sustainably.

CAMILO SOUSA is a local Asturian celebrity.  Star and main host of the weekly show MOCHILEROS, Camilo is happy to show you some of his favorite places in and around the Quiròs Valley. As one of the hiking guides at Fuentes de Lucía, he’ll share with you his favorite hikes where only the locals go. Let him pour you a sidra and tell his tales of travels through Latin America, Africa, USA, and Spain.  Check him out at: MOCHILEROS 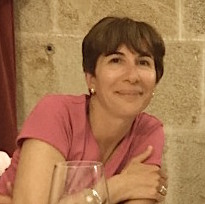 Monica Fernandez hails from the lively coastal town of Vigo, in Galicia, Spain. Being a world explorer has led to her sharing her passion for people and language with our guests. A journalist by trade, she is also an accredited Spanish language teacher. Monica is thrilled to share her enthusiasm, native language, and her country, rich in a diverse culture with us here in Asturias.
When not leading our language immersion program in Asturias, she is often found on the Camino de Santiago as one of Spanish Steps dynamic leaders.

Susanna Llop Jover is a Spanish teacher and university instructor with many years of experience; she has taught children, university students, and adults from all walks of life and at many levels of fluency. A native of Barcelona, and an American citizen residing in San Diego, California, she has maintained her Spanish roots.  She has traveled extensively throughout Asturias and the north of Spain. Susanna is friendly, caring, and approachable, enabling her to tailor conversations with you according to your needs and style.  You will delight in beautiful Asturias as you “Walk and Talk” with locals and fellow travelers.

GLEN CRANEY is an award-winning novelist, screenwriter, journalist, and lawyer. After receiving degrees from Columbia  Quarterly magazine. His historical novel about the Cathars, The Fire and the Light, has received several honors, including being named Best New Fiction by the National Indie Excellence

Committee and a Finalist for  Foreword Magazine’s Book of the Year. He is also a recipient of the Nicholl Fellowship award given by the  Academy of Motion Pictures, Arts and Sciences for best new screenwriting. His travels around the world have found him playing baseball in Cuba, walking the biblical sites of Israel, exploring the Secret Vatican Archives in Rome, and climbing Templar castles in Scotland and France. A veteran of the Camino trek with Spanish Steps, he wrote of his experiences on the trail with Judy and her gang in the February 2004 issue of The Robb Report. For more information on The Fire and the Light and the Cathars, visit Glen’s website at: www.glencraney.com and watch his book trailer at: www.glencraney.com