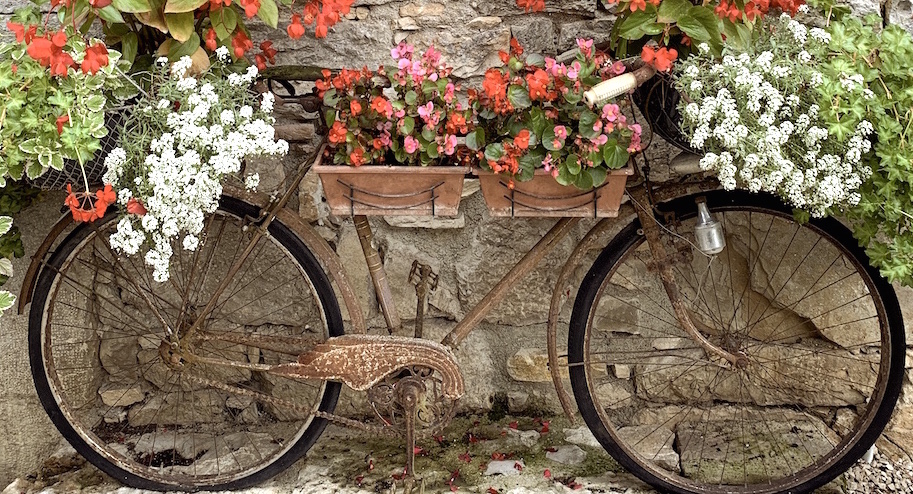 Join Spanish Steps, as we follow in the footsteps of the first non-Spanish pilgrim, the 10th century Bishop of Le Puy, Godescalc, along the Via Podiensis from Le Puy en Velay to Roncesvalles in Spain.  We break this celebrated trail into three 2-week sections but for the first time ever, to celebrate the Holy Year of Saint James, we are offering the chance to walk the entire way. EFI.  Come walk with us from the headwaters of the mighty Loire, deep in the Auvergne, to the frontier mountain range of the Pyrenees and into Spain, as we reveal the legends of this century trodden path.  Bon Chemin!

Part 1: Le Puy en Velay to Figeac: Lying in the volcanic heart of the Auvergne, the curious setting of Le Puy makes for a dramatic start. Rising from a fertile and green basin, are three volcanic ‘pugs’ of rock upon which are sited important religious edifices, most notably the Chapel of Saint-Michel d’Aiguilhe and the Black Madonna.  From here, over the past 1000 years, pilgrims from the eastern parts of Europe officially began their pilgrimage. Our trail takes us through dense pine forests and through the striking Allier gorge.  Let us tell you of the clock that strikes twice each hour in Saugues, the perched castles, the gastronomic splendor of mouth-watering lamb, black truffles, the evolving saffron industry, local specialties of aligot and estofinado, wines from the steepest vineyards in France and legends of Saints and miracles, as we tread our ‘way’ along this glorious stretch of the Chemin de St Jacques.

The dramatic landscapes of the volcanic Aubrac, wild, green mountain plateau – remote, pristine and timeless with a luminous and endless skyscape – offers us the chance to truly lose ourselves (metaphorically only of course!), as we step away from everything. Except for cows! This stretch is one of the most peaceful and empty all the way to Santiago. Upon leaving the high plateau, the gentle charm of the Lot river valley awaits us. The longest river in southwest France, it winds for almost 300 miles, a ribbon of jade, or sapphire, meandering through ever-changing landscapes. We wend our way through a delightful array of stone villages dotting riversides, hilltops, and cliffs.  The stretch of the Chemin between Saint-Côme-d’Olt and Estaing in the upper valley, the Pays d’Olt (the Lot’s original Celtic name), is a UNESCO World Heritage site. One of the great highlights of Part 1 is arriving into the magical medieval town of Conques, also UNESCO, famed for its association with the miracles of St Foy and herein lie her relics bringing thousands of faithful every year, to this hidden gem of a town.

The first part of this journey ends in Figeac, a town deeply rooted in the pilgrim’s way.  By the 13th century, four different orders had established monasteries here which in turn became pilgrim hospices, one of which still runs today as the local hospital. It is also the birthplace of Jean François Champollion, the first translator of Egyptian hieroglyphics and a replica of the Rosetta Stone is here to honor him, as is a museum dedicated to his life.

Part 2: Figeac to Condom-en-Armagnac: picks up right where we left off from Part 1. We will continue this epic walk through the Célé river valley, a lesser trodden but arguably more beautiful variant of the Chemin.  Limestone cliffs, carved with ancient dwellings hugging the impossibly steep rock walls, tower above the river. The valleys of the Célé and the Lot are famed for their labyrinth of ancient cave systems.  We will visit the Grotte du Pech Merle, discovered in 1922 by three local teenagers. Deep within its damp cavities lie prehistoric paintings dating back over 20,000 years.

Upon re-joining the GR-65, we arrive at the jaw-dropping hilltop village of Saint Cirq Lapopie, with streets that cascade down the steep-sided valley above the Lot river.  Once a hub for river trade and renowned for its wood-turners, the puzzle of little paved lanes, Gothic façades, fortified gates, and hollyhocks create a picture-perfect image of irresistible charm. It is now an artist’s enclave, a town bursting with creativity amongst the cafés and cutesy stores but it maintains 13 listed Historic Monuments so has not lost sight of its heritage.  A classic French gem of a town.

Next up we dive deep into Cahors: home of the dark, deep, dense, moody, and mesmerizing Malbec grape.  It has reigned here as ‘king’ for over five centuries and there is no better place to explore the diversity of red wines that it can produce. Indulge in truffles and foie gras, melons from nearby Quincy, cheese from Rocamadour……..need we say more?   The city was founded in Roman times and became a European center of trade and finance during the Middle Ages. The old town is still largely intact with the 14th Century Valentré bridge the most iconic emblem of the city, spanning the river with its three fortified towers rising above it.  Legend has it that the devil helped expedite the 70-year building process of the bridge. Look carefully and you will still find him there, menacing with the stones!

The Chemin heads southwest now with more determination. First stop Moissac; with the beautiful Abbey of Saint Pierre, a former Benedictine monastery founded in the 7th century. Onwards to Lectoure, a Gallo-Roman settlement with 5th-century walls, a 12th-century cathedral and soothing thermal baths, and Romieu, a small village founded by two pilgrims returning from a pilgrimage to Rome, and a fascination with cats. Part 2 of our journey ends in Condom, the heart of Armagnac, (Cognac’s more elegant, lesser-known cousin) and the origin of D’Artagnan and the Three Musketeers. What better way to conclude our walk through this seldom explored region of France than in an Armagnac cellar?  Santé

Part 3: Condom-en-Armagnac to Roncesvalles: if you haven’t had enough walking then continue on with us through the gloriously gentle Gers, known as the French Tuscany, with endless vineyards,  beaming faces of sunflowers turning to the golden rays of summer and swathes of swaying sheaves of corn.  Here the best of local gastronomy will dance on your palate with zippy, playful white wines, silken Armagnac, croustade de pommes, foie gras, confit de canard, and the best of freshly harvested vegetables you can imagine.  You’ll never want to leave.

But westward-ho, the enchanting towns of Les Landes and Béarn await our arrival: the oldest bastide village of Pimbo, important market and pilgrim towns of Nogaro and Aire-sur-l’Adour, Arthez with its panoramic vistas of the Pyrenees, the tiny 11th-century church of St James at Sensacq and the walled town of Navarrenx, home to Béarnais sauce and Frances’ best salmon.

Last, but by no means least, we delve into the foothills of the Pyrenees, deep into rich pastoral Basque country; land of brébis (sheep cheese), cider and piment d’esplette. Here the three major pilgrim routes in France come together. The bleat of sheep and clanging of cowbells accompany us as we climb steadily to St Jean Pied de Port, a quintessential Basque town at the base of Napoleon’s Pass.  A final push over the mountains into Spain, and the culmination of 2 (4 or 6) weeks of walking. Our heartbeats will intensify, and our legs will burn but our spirits will soar. For many, crossing the Pyrenees is the beginning of their Camino, but for us, arriving into Roncesvalles, Spain, is our FINALE and that very first cerveza will be well-earned nectar indeed.

What's included in each 14-day segment of the trip.

PRIVATE tailor-made trips are available upon request. Please ask us for details.

Le Puy en Velay
Le Puy en Velay
The GR-65 markers leading us to Santiago de Compostela in Spain.
On the Road! El Camino de Santiago in FRANCE. Le Chemin de Saint Jacques
Ah.... France and wisteria.
Follow the Way to Santiago. The GR 65, a "grand randonee route from Le Puy en Velay to Santiago de Compostela.
How many kilometers to Santiago?
Condom - yes folks.... this town in the Gers department is called Condom!!! This is where we begin Part 3 of the Chemin de Saint Jacques route.
Église Saint-Michel d'Aiguilhe. Le Puy en Velay
Curious pilgrims. Cahors, where delicious wine is produced.
A hobbit house draped in wisteria - Espanac, France in the Celé River Valley.
Time to reflect
Conques
Estaing, sur Le Lot
Fromage......... beautiful fromage
Moissac
Claude.
A long walk
Getting stamped by our Basques friend in Pays Basque, near St. Jean Pied Port in FRANCE.
The Aubrac Region
Back to top ^
This website uses cookies to improve your experience. We'll assume you're ok with this, but you can opt-out if you wish.Accept Read More
Privacy & Cookies Policy